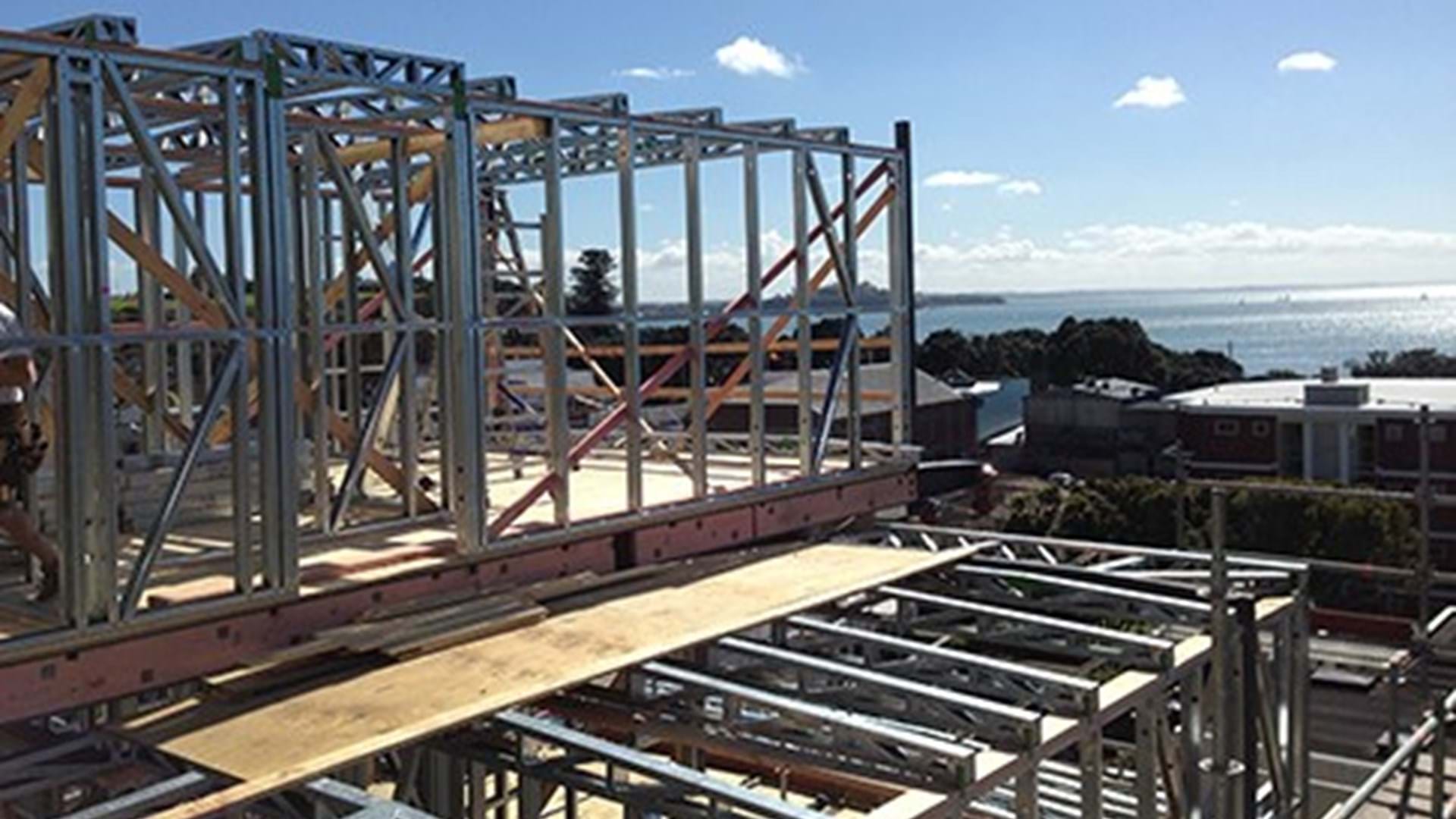 Putting the frames up is quick, so within a few weeks, the house is up and the customers go ‘wow this is amazing’ when they do a walk through.

When award-winning architect Chris Tate was approached to design a high spec home for one of New Zealand’s best known sporting icons, one of the biggest challenges he faced was the severe constraints of the site.

High on a ridge overlooking Auckland’s Hauraki Gulf, the section was extremely steep with difficult engineering challenges. To complicate things further, the access was equally steep, a long, narrow driveway bordered on both sides by established homes making it impractical for large trucks or machinery to negotiate.

While Chris’s primary reasons for designing the home using steel framing were based on his familiarity and confidence with the system and its versatility, there were very real knock-on benefits for the builders.

“It was huge advantage on this job”, says Ben Hatcher from Team Builders 2000. “Being lightweight, two guys can pick up a long frame, carry it around, pass it up multi storey buildings easily.“This home is five levels and we had to pass everything up from the bottom to the top. It saved us a huge amount of time and effort.”

Team Builders 2000 is widely regarded as Auckland’s pre eminent steel frame builders, and one of the things their customers appreciate most is how quickly the framing goes up compared with traditional timber framing.“Our customers really like it”, says Ben. “It’s clean, it’s new, they touch it. They like the initial speed. Putting the frames up is quick, so within a few weeks, the house is up and the customers go ‘wow this is amazing’ when they do a walk through.”Team Builders 2000 source their steel framing from New Zealand Framing, a subsidiary of FRAMECAD.

The division was originally set up as a research and development facility for FRAMECAD, and has since morphed into a successful business in its own right.“It’s been growing steadily and it also acts as a great showcase for FRAMECAD’s overseas customers”, says Kyle Dickinson from NZ Framing. “When they come to visit, they can see that we’re not just selling machines and software – we’re making framing ourselves and have turned it into a profitable business”.

It’s great for us, it gives us a niche market pretty much all to ourselves

“The customer service is great. The laminated plans they provide with the frames are so easy to work off. Each frame is stamped with a number on it so it’s really just a big kitset. Once you get the right fixings and the right equipment to put it up, it’s easier, much easier” – Ben Hatcher, builder.