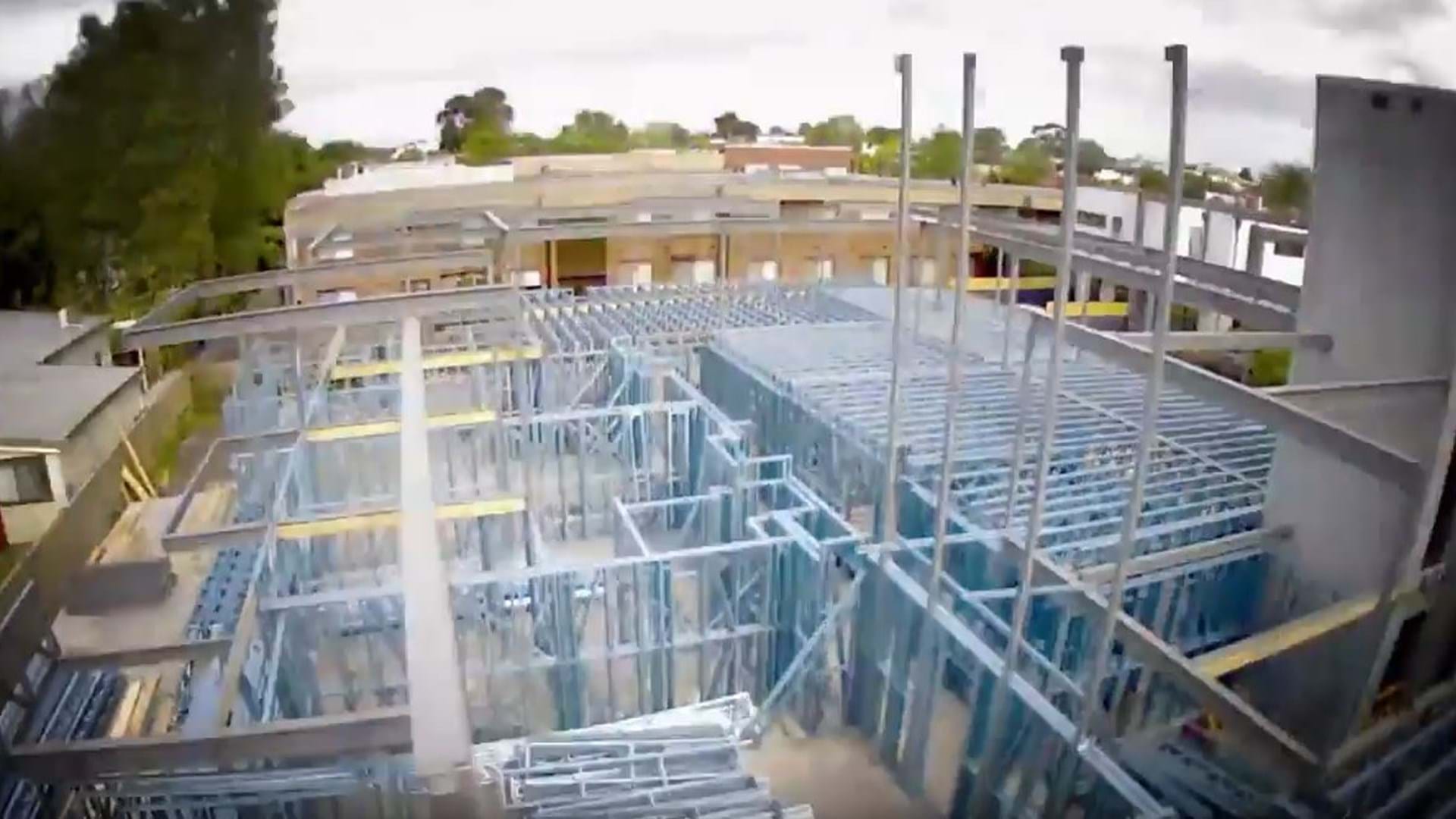 If we didn’t have FRAMECAD, we couldn’t do business in the way we do.” Peter goes on to outline how FRAMECAD’s manufacturing system has the fastest machines in the world, allowing Dynamic Steel Frame to be faster at producing frames than anyone else in the market.

With a floor area of 3200sqm and a total of over 80 tonnes of steel used, the Zinnia Apartments are comprised of 39 one, two, and three bedroom apartments. Load-bearing Light Gauge Steel frames the entire building, ranging in thickness from 1.00 to 0.75, and structural steel is only used as support for balconies and complex architectural roof overhangs. Apartments are framed with roof and floor joist trusses, which land on load bearing walls created from LGS sections. The three levels rise to a reasonably complex roof structure, requiring multiple head heights to be maintained across multiple falls throughout the top floor.

Challenges along the way

Several challenges presented themselves throughout the project, all of which were mitigated courtesy of the FRAMECAD System and LGS approach.

To start with, construction itself was occurring in a fairly tight space. If traditional wooden framework had been used, a large number of skilled tradesmen would have been needed to unload, handle and assemble the framing. According to Intracon Director, James Banks, “Cranage was difficult due to difficult site access, but the light framing made moving trusses easier.” Given the light-weight nature of the LGS used, less manpower was required to unload and move the framing. As well as this, with the FRAMECAD System, roll form machines pre-cut, form, punch, number and label frames and parts “like an erector set” which means no welding, cutting or riveting is needed on-site and fewer skilled labourers and tools had to be squeezed into the site for assembly.

Use of LGS and the FRAMECAD System also cut construction time dramatically. Not only would timber framing have required twice the manpower to unload and assemble, but it would have taken twice as long. All frames were fully installed in 11 weeks, about seven weeks faster than working with concrete would have taken. “Using steel framing allows earlier access to floors for following trades, as no curing or back-propping of the structure is required,” says Peter Blythe, General Manager of Dynamic Steel Frame. This meant installation of internal wall cladding could occur concurrently, significantly reducing construction time by up to two months. The ability to prefabricate steel frames through the FRAMECAD System is one of the key reasons why construction could occur so rapidly onsite, with time-cost savings of up to $50,000 according to Peter.

Challenges also arose due to the pioneering nature of this project. Strength and acoustic tests had to be run to ensure floor joists weren’t flexing; they needed to be stiff enough not to bounce and transmit noise throughout the apartment. A series of tests were conducted, and the strength results were impressive—ultimate failure only occurred at 12.5 kPa and a deflection of 45mm, over three times the applied design load. A separate 4m x 4m ‘dummy room’ was also constructed at the engineer’s request, to demonstrate the acoustic suitability of Dynamic Steel Frame’s solution.

When Peter Blythe is asked why he chooses to use the FRAMECAD System for projects like this, his answer is simple. “It’s the basis of our entire business. If we didn’t have FRAMECAD, we couldn’t do business in the way we do.” Peter goes on to outline how FRAMECAD’s manufacturing system has the fastest machines in the world, allowing Dynamic Steel Frame to be faster at producing frames than anyone else in the market.

Dynamic Steel Frame also use FRAMECAD’s design and engineering software on a daily basis. “By pre-engineering before going to suppliers, we cut down significantly on skilled labour costs.” The integration of the FRAMECAD System into Dynamic Steel Frame’s operations allows it to be immensely responsive and flexible for their customers. Customised solutions such as creating a separate room to test acoustics, or run strength testing, are easily accommodated and adjusted for using FRAMECAD’s software.

Having worked with Mark TAYLOR, CEO of FRAMECAD in the past, Peter can state without a doubt: “They make us better than anyone else can.”